Most of the medications used in fertility treatment are versions of the body’s own hormones.

In the natural menstrual cycle:

Fertility treatments like clomiphene, IUI with ovarian stimulation and IVF speed up the natural cycle process.

Your clinic team at FA will monitor the ovaries during the course of treatment using blood tests and ultrasound scans. 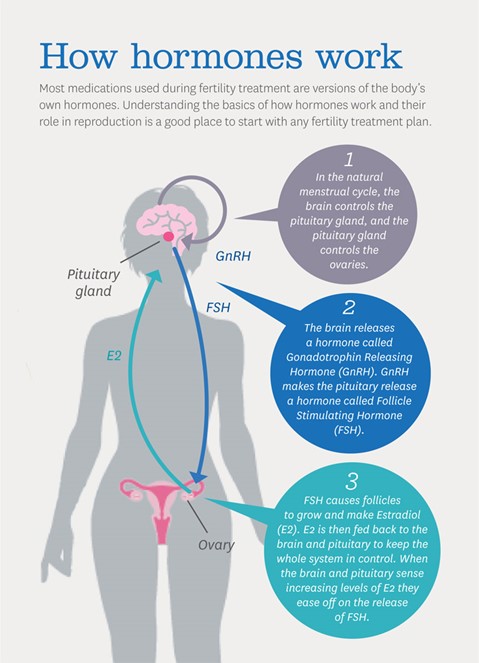 Luteinising hormone (LH) - A surge of LH in the middle of the cycle triggers the final maturation of the egg and ovulation of the follicle(s) containing mature eggs. After ovulation it helps maintain progesterone secretion.

human Chorionic Gonadotrophin (hCG) - hCG is the main hormone made by the early embryo once it implants. It has a similar biological effect to LH. hCG is the hormone detected by pregnancy tests.

Estradiol (E2) - E2 is the main estrogen hormone made by developing follicles. It has many actions, including growing the lining of the uterus (called the endometrium).

Progesterone (P4) - P4 is the main hormone secreted by the follicle once it has released its egg. Its major action is to maintain the lining of the uterus so an embryo can implant and cause a pregnancy.

www.medsafe.govt.nz – use the ‘search’ box to find the data sheet for any medication.